Just like VBOs and VAOs, textures are objects that need to be generated first by calling a function. It shouldn't be a surprise at this point what this function is called.

Textures are typically used for images to decorate 3D models, but in reality they can be used to store many different kinds of data. It's possible to have 1D, 2D and even 3D textures, which can be used to store bulk data on the GPU. An example of another use for textures is storing terrain information. This article will pay attention to the use of textures for images, but the principles generally apply to all kinds of textures.

Just like other objects, textures have to be bound to apply operations to them. Since images are 2D arrays of pixels, it will be bound to the GL_TEXTURE_2D target.

The pixels in the texture will be addressed using texture coordinates during drawing operations. These coordinates range from 0.0 to 1.0 where (0,0) is conventionally the bottom-left corner and (1,1) is the top-right corner of the texture image. The operation that uses these texture coordinates to retrieve color information from the pixels is called sampling. There are different ways to approach this problem, each being appropriate for different scenarios. OpenGL offers you many options to control how this sampling is done, of which the common ones will be discussed here.

The first thing you'll have to consider is how the texture should be sampled when a coordinate outside the range of 0 to 1 is given. OpenGL offers 4 ways of handling this:

These explanations may still be a bit cryptic and since OpenGL is all about graphics, let's see what all of these cases actually look like:

The wrapping can be set per coordinate, where the equivalent of (x,y,z) in texture coordinates is called (s,t,r). Texture parameter are changed with the glTexParameter* functions as demonstrated here.

This operation will set the border color to red.

Since texture coordinates are resolution independent, they won't always match a pixel exactly. This happens when a texture image is stretched beyond its original size or when it's sized down. OpenGL offers various methods to decide on the sampled color when this happens. This process is called filtering and the following methods are available:

Before discussing mipmaps, let's first see the difference between nearest and linear interpolation. The original image is 16 times smaller than the rectangle it was rasterized on.

While linear interpolation gives a smoother result, it isn't always the most ideal option. Nearest neighbour interpolation is more suited in games that want to mimic 8 bit graphics, because of the pixelated look.

As you've seen, there is another way to filter textures: mipmaps. Mipmaps are smaller copies of your texture that have been sized down and filtered in advance. It is recommended that you use them because they result in both a higher quality and higher performance.

Generating them is as simple as calling the function above, so there's no excuse for not using them! Note that you do have to load the texture image itself before mipmaps can be generated from it.

To use mipmaps, select one of the four mipmap filtering methods.

There are some other texture parameters available, but they're suited for specialized operations. You can read about them in the specification.

Now that the texture object has been configured it's time to load the texture image. This is done by simply loading an array of pixels into it:

The first parameter after the texture target is the level-of-detail, where 0 is the base image. This parameter can be used to load your own mipmap images. The second parameter specifies the internal pixel format, the format in which pixels should be stored on the graphics card. Many different formats are available, including compressed formats, so it's certainly worth taking a look at all of the options. The third and fourth parameters specify the width and height of the image. The fifth parameter should always have a value of 0 per the specification. The next two parameter describe the format of the pixels in the array that will be loaded and the final parameter specifies the array itself. The function begins loading the image at coordinate (0,0), so pay attention to this.

But how is the pixel array itself established? Textures in graphics applications will usually be a lot more sophisticated than simple patterns and will be loaded from files. Best practice is to have your files in a format that is natively supported by the hardware, but it may sometimes be more convenient to load textures from common image formats like JPG and PNG. Unfortunately OpenGL doesn't offer any helper functions to load pixels from these image files, but that's where third-party libraries come in handy again! The SOIL library will be discussed here along with some of the alternatives.

SOIL (Simple OpenGL Image Library) is a small and easy-to-use library that loads image files directly into texture objects or creates them for you. You can start using it in your project by linking with SOIL and adding the src directory to your include path. It includes Visual Studio project files to compile it yourself.

Although SOIL includes functions to automatically create a texture from an image, it uses features that aren't available in modern OpenGL. Because of this we'll simply use SOIL as image loader and create the texture ourselves.

You can start configuring the texture parameters and generating mipmaps after this.

You can clean up the image data right after you've loaded it into the texture.

Other libraries that support a wide range of file types like SOIL are DevIL and FreeImage. If you're just interested in one file type, it's also possible to use libraries like libpng and libjpeg directly. If you're looking for more of an adventure, have a look at the specification of the BMP and TGA file formats, it's not that hard to implement a loader for them yourself.

The vertex shader needs to be modified so that the texture coordinates are interpolated over the fragments:

Just like when the color attribute was added, the attribute pointers need to be adapted to the new format:

As two floats were added for the coordinates, one vertex is now 7 floats in size and the texture coordinate attribute consists of 2 of those floats.

Now just one thing remains: providing access to the texture in the fragment shader to sample pixels from it. This is done by adding a uniform of type sampler2D, which will have a default value of 0. This only needs to be changed when access has to be provided to multiple textures, which will be considered in the next section.

For this sample, the image of the kitten used above will be loaded using the SOIL library. Make sure that it is located in the working directory of the application.

To sample a pixel from a 2D texture using the sampler, the function texture can be called with the relevant sampler and texture coordinate as parameters. We'll also multiply the sampled color with the color attribute to get an interesting effect. Your fragment shader will now look like this:

When running this application, you should get the following result: 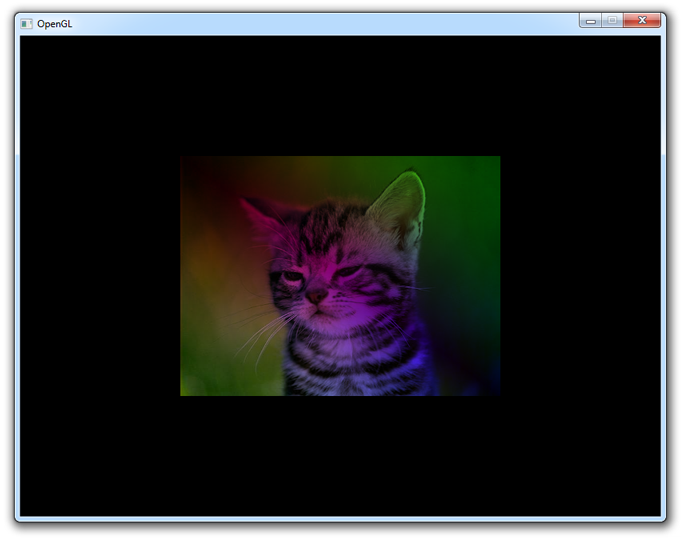 If you get a black screen, make sure that your shaders compiled successfully and that the image is correctly loaded. If you can't find the problem, try comparing your code to the sample code.

The function glActiveTexture specifies which texture unit a texture object is bound to when glBindTexture is called.

The amount of texture units supported differs per graphics card, but it will be at least 48. It is safe to say that you will never hit this limit in even the most extreme graphics applications.

To practice with sampling from multiple textures, let's try blending the images of the kitten and one of a puppy to get the best of both worlds! Let's first modify the fragment shader to sample from two textures and blend the pixels:

Now that the two samplers are ready, you'll have to assign the first two texture units to them and bind the two textures to those units. This is done by adding the proper glActiveTexture calls to the texture loading code.

The texture units of the samplers are set using the glUniform function you've seen in the previous chapter. It simply accepts an integer specifying the texture unit. Make sure that at least the wrap texture parameters are set for both textures. This code should result in the following image. 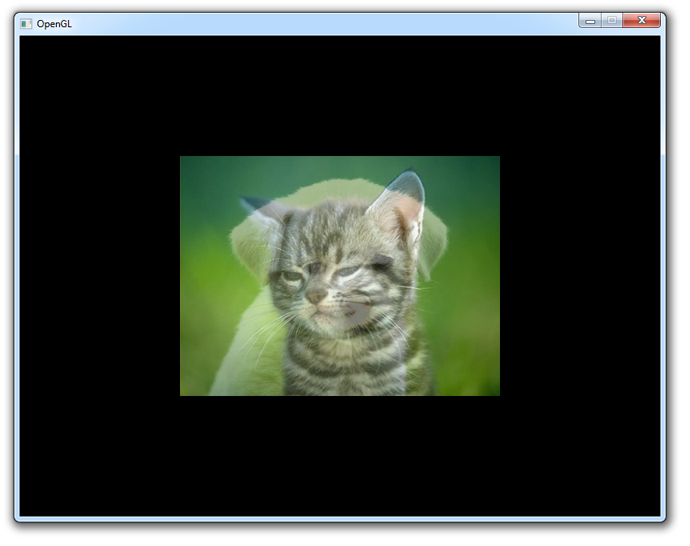 As always, have a look at the sample source code if you have trouble getting the program to work.

Now that texture sampling has been covered in this chapter, you're finally ready to dive into transformations and ultimately 3D. The knowledge you have at this point should be sufficient for producing most types of 2D games, except for transformations like rotation and scaling which will be covered in the next chapter.